Brandon, MS (October 21, 2022) – An auto crash that happened in Rankin County turned fatal on Thursday morning, October 20. At about 9:35 a.m., a truck driver lost his life in the incident that took place on Highway 18.

Information provided by the Mississippi Highway Patrol reveals that multiple drivers were headed east on Highway 18 when the incident occurred. The vehicles were all in the process of stopping behind a trash hauler. A log truck collided with the rear end of a tractor-trailer that was stopped behind the line of vehicles.

The driver of the log truck, Christopher E. Raynes, 33, of Mt. Olive, was fatally injured in the accident. The other truck driver, identified as 30-year-old Koron Meeks, sustained no injuries in the collision.

A jeep driver involved in the wreck was taken to the University of Mississippi Medical Center by ambulance with injuries of an unknown magnitude. Those occupying a Ford utility truck that was involved also were unharmed.

The highway was closed while the wreck scene was active with responders. Police worked to investigate the incident while paramedics tended to injured victims and fire crews worked to clear the debris from the road – including many logs that were strewn across the highway.

Police continue to investigate the details of the collision.

We would like to offer our sincere condolences to the family of Christopher E. Raynes. We hope for the full recovery of Koron Meeks. 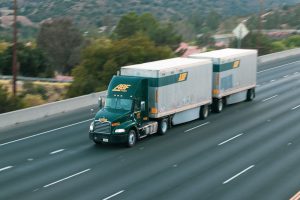 Traffic collisions happen at an alarming rate throughout the country. In Mississippi specifically, over 100,000 auto accidents are reported per year that injure tens of thousands. A percentage of the wrecks that happen in the Magnolia State involve semi-trucks. Throughout the nation, from 2009 to 2022, the frequency of large truck accidents has increased by over 50%.

The aftermath of an 18-wheeler crash is more likely to result in devastation than any other type of auto collision. This is most likely when the truck collides with a much smaller passenger vehicle. Semi-trucks are usually about 20 to 30 times heavier than the average four-door passenger car. This poses a serious problem when the two collide – and usually results in massive damage and severe or even deadly injuries for those involved. Commercial truck accidents can happen in many forms, including:

The drivers of passenger vehicles may be able to reduce the likelihood of becoming involved in a collision with a semi-truck by staying out of their blind spots as often as possible. These four blind spots include:

If you or someone you love has been involved in a semi-truck accident, it is unfortunately likely that the incident was caused by driver negligence. Semi-truck drivers are often overworked and overtired, causing their driving to become erratic, sloppy, and unsafe. If you think your crash was caused by a negligent semi-truck driver, call a truck crash lawyer as soon as you can to learn about your legal right toward financial compensation.

Especially if you have lost someone you love in a semi-truck accident caused by driver negligence, you deserve to be compensated for the losses and damages you face. Though it may seem like right now is no time to think about money, you may be facing overwhelming costs related to the loss of your loved one. Funeral care costs, outstanding medical bills, and more may be piling up while you wonder where you can turn for help. Allow a wrongful death lawyer in Brandon to help you financially recover during this difficult time.

Note: These posts are generated solely for MW Law Firm -Mama Justice.  The facts and information utilized to create these posts were collected and gathered through the use of secondary sources.  We use various news organizations, newspaper articles, police accident reports, police blotters, and social media platforms, as well as, first-hand eyewitness accounts about accidents that happen in and around Northern Mississippi.  We have not independently verified all reported facts in our posts. If you locate any information that is not correct, please contact our firm immediately so that we can update the post with the most accurate information available. If you would like to have this post removed from our site, please contact us immediately.  We will do our best to remove it as soon as possible.

Disclaimer: We, at MW Law Firm – Mama Justice, have worked hard to become valued members of the Northern Mississippi business community. We write these posts to bring awareness to the dangers of driving in hopes that our fellow community members will use an abundance of caution when operating a motor vehicle.  The information in this post is not intended to be medical or legal advice. The photographs used in this post are not taken at the actual accident scene.